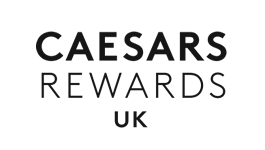 VIP Services We have to ask.

It’s fast and easy. Join Caesars Rewards today by filling in the form below and get on the road to earning some fantastic benefits.

Our poker room will be open from 6.30pm Wednesday to Sunday for cash games. All tournaments and poker packages are currently suspended. Click here to find out more.

Our popular Cash Race is making a return this June!

The Cash Race will run from Wednesday 16 June to Saturday 31 July with the Final Tournament taking place on Sunday 8 August at 4pm.

Hand must be dealt by house dealer

hand must see a flop

Lose with 8888 or higher using both hole cards.

Jackpot active during Weekly Diary tournaments only, to qualify you must be a Caesars Rewards UK cardholder.

Jackpot pays when a player gets a Royal Flush using both hole cards.

Jackpot active during Weekly Diary tournaments only, to qualify you must be a Caesars Rewards UK cardholder.

Stay up to date

Send us an Enquiry

Live gaming is available from noon.

We’re sorry you are having an issue but hopefully we can get you sorted right now.

Here are some solutions that might help, please try the following:

Having difficulty Logging In?

Try to sign in with your Caesars Rewards membership number instead of your email address. If this gives you access please check the email address we hold for you in the preference section.

To register we need a valid email address on our system. If you haven’t provided an email address, next time you visit your local casino please update your details with Reception. This also applies if your email address has changed.

If these fixes above don’t help contact Customer Support.